Emergency alert app for wearable device to save lives.

VSNmobil, the makers of VALRT wearable device, are leaders in making groundbreakingly simple and innovative consumer electronics. Driven by a leadership team comprising of brains from Motorola, Samsung and General Dynamics, VSNmobil have over 200 global patents for wearable devices invented for industry verticals like public safety, education and manufacturing and have made a 160 million off those device sales till date.

VALRT wanted to create a mobile app that connects people to their near and loved ones to get help immediately in case of medical emergency, personal security threats, accidents etc., by seamlessly synchronizing the wearable device and mobile app.

Contus had to avoid pairing confusions during scenarios where bluetooth enabled devices apart from VALRT comes in range with the mobile app.

Providing both voice calling and text messaging options for emergency alerts to loved were the major challenges faced by Contus.

The device reconnect notification was quite complicated as it has to be sent only when the VALRT device is disconnected from the mobile phone and not when other bluetooth enabled devices paired with the phone goes out of range. Achieving accuracy in fetching the location of a user whose device has triggered an alert was a roadblock.

Contus built a custom Bluetooth layer to overcome the connectivity challenge encountered in synchronizing the app and device. The custom built profile also served the purpose of clearly distinguishing the wearable device's signal for the mobile app to pick it up and pair without confusions.

Contus' development experts, in order to partition VALRT device's connectivity signal from the other devices for the app to clearly understand it, came up with codes that considers VALRT's signal as a separate service. This helped the app to distinguish the device's signal easily.

A wearable technology company which has invented more than 200 devices wanted a mobile app to power one of its device, VALRT, developed for the purpose of providing instant emergency calling option in case of physical threats, accidents, illness etc.

Contus, with the help of its app connectivity experts, iOS and Android app development team, created apps that can be linked to the app to serve the purpose of emergency call triggering.

VALRT device was geared up with the necessary app medium to help those wearing it call for help with just a touch of a button.

The simple yet, highly handy technology was a hit among the masses and impressed many common people to make use of it which eventually improved the sales graph and helped in achieving the motive of rendering personal safety and emergency help.

Here are some of the features of the app developed on iOS platform:

The device and app sync was done in such a way that the app receives notifications under every circumstances the connectivity status. Successful connection, disconnect, out of range and low battery are a few notifications alerts provided for the app.

After 30 seconds of pairing, a 128 BIT hexadecimal code will be generated by the wearable device which can be recognized only by the app to make sure that the sync has happened correctly.

The emergency contacts to which the emergency alert should be sent can be set by users. Users can also set preferences on the type of alerts, between SMS and voice calls, for each contact number and text messages can be edited as well.

The app facilitates a complete walkthrough on how to get started including device activation, app to device pairing and alert message configurations to help users set preferences without confusion.

Using GPS and maps the location information of app user is shared with the persons receiving the emergency calls which helps them to rush to the exact location immediately. 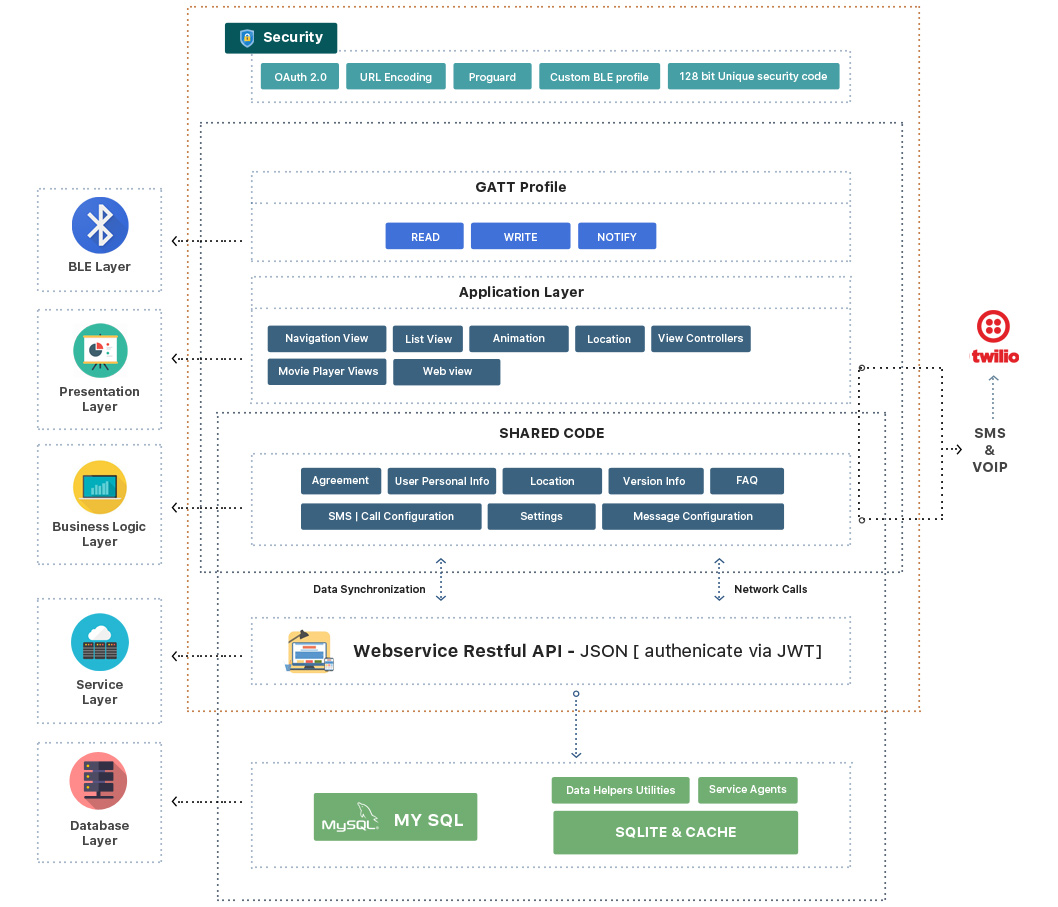 The app was successful which helped in garnering more users for the device in a short time span. The technology encouraged people from diverse age groups, especially senior citizens and women to use the device.

Thus the makers of VALRT were able to achieve their motive of rendering simple, tech-enabled help for personal health and security protection. Gaining more significance with the app, VALRT device is playing a major role in providing emergency help for over 10k to 15 k people.